Research results from a collaborative project with Grassroot, a civic technology organization based in South Africa.

Our guide on how to teach on WhatsApp and course materials from the pilot are also available online. Below we include some excerpts from the research results:

Grassroot, a civic technology organization based in South Africa, launched a first-of-its-kind leadership development course over the messaging platform WhatsApp. The distance-learning course, Leadership through Storytelling, was designed to build the capacity of organizers for sustained community activism. In 2019, Grassroot piloted the course and collaborated with the MIT GOV/LAB to conduct mixed-methods research on the effectiveness of the course content and its potential to advance long-term community organizing goals. This Outcome Brief discusses pilot results and the possibility of reimagining social media platforms such as WhatsApp, often in the spotlight for their negative role in spreading misinformation and sowing the seeds of distrust, as a new avenue for advancing civic pedagogy and networking for long-term social movement building. Though additional iterations are required, initial results suggest that the WhatsApp course was able to connect grassroots organizers in a novel way that encourages learning and information exchange.

Grassroot, a civic technology organization in South Africa, created a messaging platform to help grassroots leaders communicate more effectively with their communities. While the Grassroot platform supported increased levels of activism (e.g., more meetings, petitions, actions), there was a steep dropoff in community engagement after an initial spike. From engaging with communities, Grassroot believed that existing methods of leadership development —primarily political education through inperson workshops— needed to be supplemented by new material and delivery methods. Communities were more fragmented than in the past, less easily unified around a single goal (as had been the case for defeating Apartheid, for example), and potential community leaders were less likely to belong to formal organizations that could support them to attend multi-day in-person leadership programs. This led Grassroot to develop a first-of-its-kind distance-learning course taught entirely over WhatsApp.

The course, Leadership through Storytelling, was designed to meet people where they are, engage them over a sustained period of at least a month, use group-based pedagogy, and focus on long-range leadership capacity. While WhatsApp groups are often in the spotlight for negative reasons, the platform seemed like a promising medium to test Grassroot’s objectives, especially in low-bandwidth environments. The course material drew on Harvard Professor Marshall Ganz’s Public Narrative work, which uses storytelling on individual and collective values and experiences to inspire leadership and commitment to social change. Piloted over five classes, the course reached more than forty distance learners in South Africa, largely in urban and peri-urban areas near Johannesburg and Durban.

Grassroot partnered with MIT GOV/LAB to assess the pilot and to determine which course components were most effective. Using a mix of quantitative and qualitative methods, the research collaboration found that: (i) WhatsApp is a viable medium of civic pedagogy, if combined with a strong teaching team, behavioral incentives, and attention to design details from the start; and (ii) the course content had varying effects on different demographics, including employment status and education, but likely requires substantial revision to better link storytelling to organizing tactics and strategies, including a focus on recruiting community members to engage more deeply and regularly in activism.

The overall implication, for Grassroot and other organizations, is that WhatsApp’s potential as a pedagogical medium should be further explored, specifically how to build relationships and networks that translate into offline action.

Below are three takeaways that touch on participation rates over the course of the pilot, the impact of storytelling on action, and the need to focus on deeper recruitment to build sustained social movements. Additional details on research methods provided at the end of the brief.

How was class attendance and participation on WhatsApp? Increased over time with thoughtful design, behavioral incentives, active coaching, and iteration.

One challenge in teaching a distance learning class on WhatsApp is how to maintain good-quality participation. There were multiple reasons participants would not follow through with the course: it was taught entirely online without the opportunity for in-person interaction, it was free (so participants did not feel any monetary commitment), and was time-consuming (the entire course was estimated to take 16 hours over the month).

During the pilot, each group had 10-15 participants and participation rates across the cohorts varied widely. On a composite measure (see brief for details) of what percentage of questions were answered in group sessions and whether homework assignments were completed, average participation rates across all classes ranged from 16 (out of 100) to 58. On the simpler measure of how many participants answered more than a third of questions in the final session, rates ranged from a low of 12% to almost 70% (see figure). The groups with low completion rates showed that just because WhatsApp is a near-ubiquitous communications medium, using it to deliver multimedia content does not necessarily lead to participant engagement. 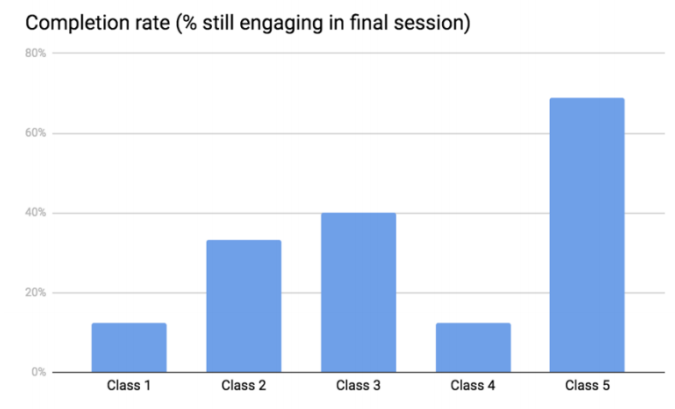 On the other hand, when we made adjustments to multiple course elements (course content, role of coaches, incentives for participation, and recruitment strategies), participation increased. This shows that with sufficient care and attention to detail, WhatsApp can be used to build an active, group-focused online classroom. Perhaps more so, the very high completion rates —especially in light of the obstacles to participation— show that in practice, WhatsApp can be an effective, new form of a classroom, if carefully structured and with its use repeatedly iterated. For details, see the practitioner’s guide.

Can stories from the course inspire action? Youth and the employed seem to respond more to the power of stories.

A central research question was how storytelling, as adapted from Professor Ganz’s work on Public Narrative, influences grassroots organizers. In particular, we were interested in examining if the stories used in the course were effective in inspiring people to take action or in influencing beliefs that they could enact change as an individual or as part of a group (i.e., individual or collective self-efficacy). Additionally, we wanted to tease out whether people as individuals or a group believe in their ability to take action (internal efficacy) or to change someone else’s behavior (external efficacy).

Story from the course:

“In my community we have the problem of electricity, it happens every time when we try to use appliances like [the] heater, stove. The electricity company came to us promising to fix it by cutting off the connection because they said they needed to deal with that low supply but unfortunately, we went without electricity for some months and they never came to us for the update. This takes me back [to] when I was young and didn’t know how to raise my voice against the situation I didn’t agree with. I remember when I was employed in one of the big financial institutions in South Africa where we were supposed to use English to communicate at the place of work. We didn’t use our home language, but unfortunately others were using Afrikaans which was not allowed, and we launched a complaint. It showed my integrity as a leader and the values that I have now. I will be leading my community to go and protest against electricity that we have our electricity back. It will be a peaceful march to the offices of [the] company that supplies electricity in the municipality demanding our rights to have the electricity and this must happen now because we believe that if we don’t stand up and go this route as a community, we will suffer.” — Bongani Sibaya, Grassroot course coach

What are effective ways for online learning to facilitate long-term movement-building?

Online tools need to focus more on recruitment and networking. Grassroot’s motivation for creating the course was to first think about long-term ways to build sustained social movements, and, secondly, to do so by reclaiming social media platforms to support citizen engagement. To better understand how these objectives play out in practice, we conducted 20 qualitative interviews to understand the specific contexts in which grassroots organizers were operating. Here are some highlights:

Discussion and Next Steps

Over the course of the pilot development and research process, we’ve made leaps in our understanding of how to cultivate social media, like WhatsApp, as a positive medium for civic pedagogy and distance learning. From interviews, we also know that the course has a fresh appeal as well as benefits from group learning. One respondent said the course was helpful and convenient, “I’ve never done anything online, so I liked it. We were also one in the group and it was a lot of fun”. Another noted that they learned lessons from the others in the course, from the strategies they use, and hearing their stories gave them hope.

Some key observations emerged from the research findings to inform Grassroot’s next steps:

Though we have just begun to explore the potential of WhatsApp for fostering stronger ties among grassroot organizers, we’re encouraged by the pilot results. Moving forward, Grassroot is continuing to iterate on the course, developing new outreach and recruitment methods, adjusting the course curriculum, and designing a new WhatsApp course focusing on organizing tactics and skills. This second course will be made available for organizers who completed the first course on Leadership through Storytelling. MIT GOV/LAB is also working on a detailed summary of the research findings and implications more broadly for building stronger social movements. For details on the pilot and the mechanics of teaching on WhatsApp, please check out our practitioner guide.

Grassroot and MIT GOV/LAB co-designed the research questions and process through a series of interactions, including a design sprint and four rounds of field work. In total, MIT GOV/LAB spent more than 12 weeks in South Africa supporting the following mixed-methods research: