The Imbuto Foundation is a Rwandan organization dedicated to advancing health, education, and youth empowerment. A key component of its Adolescent Sexual Reproductive Health and Rights Program is the Parent Adolescent Communication Forum, where parents and children are grouped by generation and gender to openly discuss family matters, including sexual and reproductive health questions. A men's focus group is pictured here.

A Conversation with Gideon Too, an MIT GOV/LAB Practitioner-in-Residence

Gideon Too from Busara spoke about his experience studying governance and accountability and the guide for practitioners he’s developing at MIT.

Gideon Too, Engagement Director at the Busara Center for Behavioral Economics, has joined MIT GOV/LAB as a practitioner-in-residence this year. The residency provides practitioner partners with resources to share lessons learned and explore new research ideas.

While at MIT, Gideon will be codifying takeaways from his work at Busara in the form of a guide for practitioners. He spoke with science writer Will Sullivan about his work studying governance and accountability at Busara and some of the lessons he’ll be sharing in his guide. The following conversation has been edited for length and clarity. 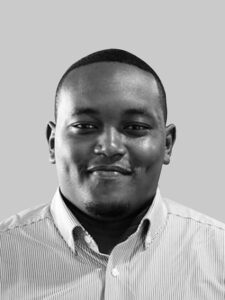 Gideon: Former U.N. Secretary General Kofi Annan famously once said, “good governance is perhaps the single most important factor in eradicating poverty and promoting development.” For me, a well-governed society is led by a government that is sufficiently accountable and responsive to its citizens and is formed of a citizenry that understands and actively pursues its rights and responsibilities.

Will: What makes behavioral science a particularly good tool for studying the relationships between citizens and government?

Gideon: Behavioral science is fundamentally the study of how human beings make decisions and how we behave. It’s been successfully used for a couple of decades in the global north, but is a relatively new field in this part of the world, where its use has largely been restricted to the private sector (particularly in advertising), and hasn’t really found a wide application on topics to do with governance and accountability.

Since behavioral science is a relatively niche field, the supply has yet to meet the growing demand, particularly in our part of the world. Busara not only helps our partners solve problems, we also cultivate behavioral expertise through long-term capacity strengthening engagements. This includes learning workshops, joint pilots, and collaborative research.

A big learning from my Busara experience is that the practical usefulness of behavioral science is fully realized when its insights and tools are placed in the right hands. While Busara conducts primary behavioral science research, which often involves engaging with communities as respondents, we don’t create and implement interventions and programs. This is done by the CSOs, social movements, and activist groups we work closely with and that we support through our research. They are often embedded within and directly engage with communities, and they play the crucial role of highlighting, influencing, and enabling citizens to engage effectively with governance processes and institutions.

Will: Could you give an example of what conducting behavioral science research in a governance space looks like in practice?

Gideon: We’ve been conducting research in Uganda for the past few years, the first phase of which aimed to answer three questions: How do you gain access and trust in a new community, how do you run an effective and motivating interaction in that community, and how do you do that at scale in a country as diverse as Uganda? This involved qualitative research interviewing religious leaders, community monitors (prominent citizens that act as community representatives), local leaders, and a nation-wide survey to understand the prevalence of certain political behaviors. We also did lab experiments to better dig into the impact of different behavioral interventions on political outcomes we care about, such as attending community meetings, signing up for information, joining a petition, etc.

In the second phase, which we’re in right now, we’re trying to understand how citizens engage with their community, what their barriers to civic engagement are, what narratives they are receptive to, and who they are likely to listen to within their social networks.

Will: During your residency at MIT, you’re reflecting on and synthesizing learnings from the research you’ve done on governance and the partnerships you’ve had in that space. What interested you in this opportunity?

Gideon: Work at Busara, like in many consultancies or advisory organizations, can be very fast moving. It can be difficult to get the time and the headspace to look back and reflect on your work and its place in the world.

We are knowledge producers and researchers, but we also work very closely with partners and have a good sense of the context they work in. I felt like if I had the time and space to put some of this knowledge and experience together in a coherent way, that would be a service to the field. Someone somewhere will find it useful and apply its lessons in one form or another in their work.

Will: When you first realized you wanted to share some of the lessons you’ve learned, was there a particular finding or theme that made you think, “this is something that more people should know about?”

Gideon: After working with more than a dozen CSOs, I have observed that there can be a striking difference between what they suspect will be effective with their audiences versus what is. Grassroots CSOs in particular are the closest entities to communities they serve, and often have the most in-depth understanding of the daily lived experiences of their audiences. However, I have observed that CSO rhetoric often talks about “rights”, “justice,” and “freedom” – impersonal, intimidating, and abstract language that is often divorced from the everyday experiences of those it seeks to persuade. From our work, we have learned that advocacy messaging that employs self-affirmation (rather than external lecturing) and is narrative-based tends to fare a little better than “rights” messaging.