Trust as a Prerequisite for Compliance: Assessing Trust in Sierra Leone During Covid-19

Our second survey in Sierra Leone during Covid-19 showed that citizens are trusting of different authorities, suggesting people might be willing to comply with public health policies.

Last year, the MIT Governance Lab (MIT GOV/LAB) helped conduct two national surveys in Sierra Leone to inform the government’s response to the Covid-19 pandemic. Questions measured people’s understanding of how the virus was transmitted, the prevalence of mask-wearing and other preventative measures, levels of food insecurity, and more.

The first survey took place in person in April, at which point there had been only a handful of cases of Covid-19 nationwide. We shared some preliminary results in May. The second survey began as a phone survey in July, but it proved difficult to reach a nationally representative sample over the phone (women and rural residents were especially hard to reach). Fortunately, case numbers remained low throughout the summer (~1 positive test daily per million people), so the research team was able to safely return to the field for some more in-person surveying.

In the graphs below, we share some findings from the second survey that show how much trust people have in different authorities, which can inform how to best communicate public health measures and promote compliance. The surveys, which each had around 2,400 respondents and included people from each of Sierra Leone’s 16 districts, were conducted in partnership with the Institute for Governance Reform (IGR) and Sierra Leone’s Directorate of Science, Technology and Innovation (DSTI) and Ministry of Finance’s Research and Delivery Division (MoF-RDD).

During the second survey in July and August 2020, people were asked how much they trusted the government, the Ministry of Health, traditional leaders, and other authorities, and they were given four response options: that they trusted that authority “a lot,” “somewhat,” “just a little,” or “not at all.” 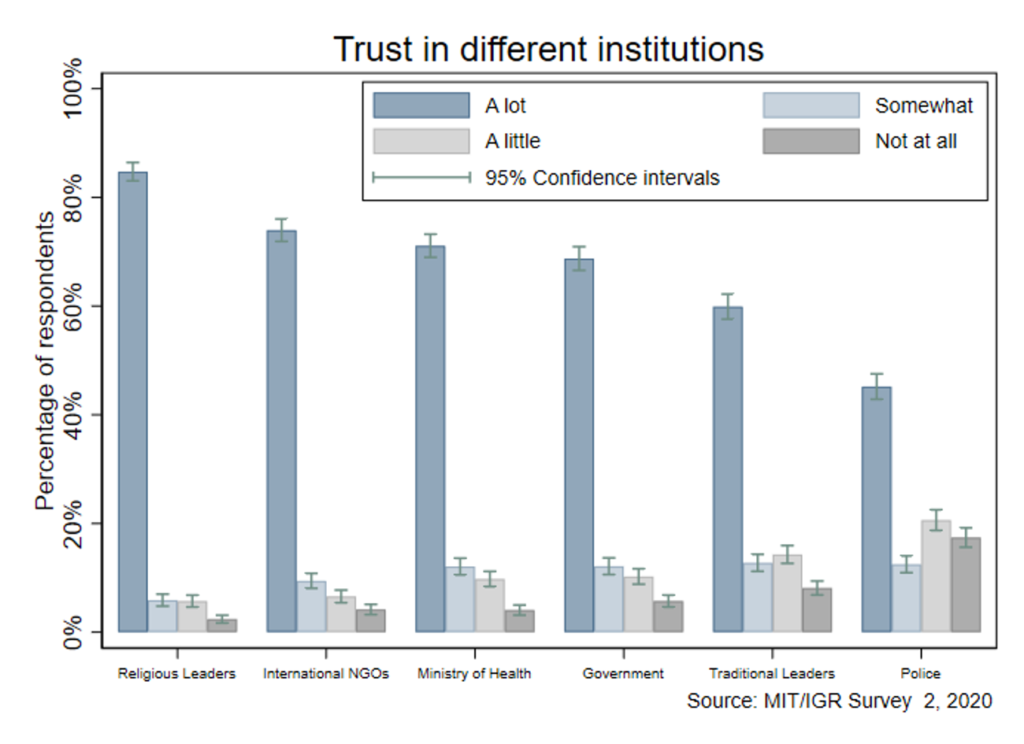 Trust levels were very high for most authorities, with at least 60% of respondents trusting religious leaders, international NGOs, the Ministry of Health, the government, and traditional leaders (like a local chief) “a lot.” For these five authorities, the percentage of respondents who trusted either “a lot” or “somewhat” ranged from 91% for religious leaders to 73% for traditional leaders.

Levels of trust in police were significantly lower, with only 45% of respondents trusting police “a lot,” and 38% trusting police either “just a little” or “not at all.”

This high level of trust in the Ministry of Health and the government in particular is in line with a recent paper in Nature Medicine, which found that among the twelve countries surveyed, Sierra Leone had the highest percentage of respondents naming health care workers or the Ministry of Health and government as their most trusted source of information on Covid-19 vaccines. 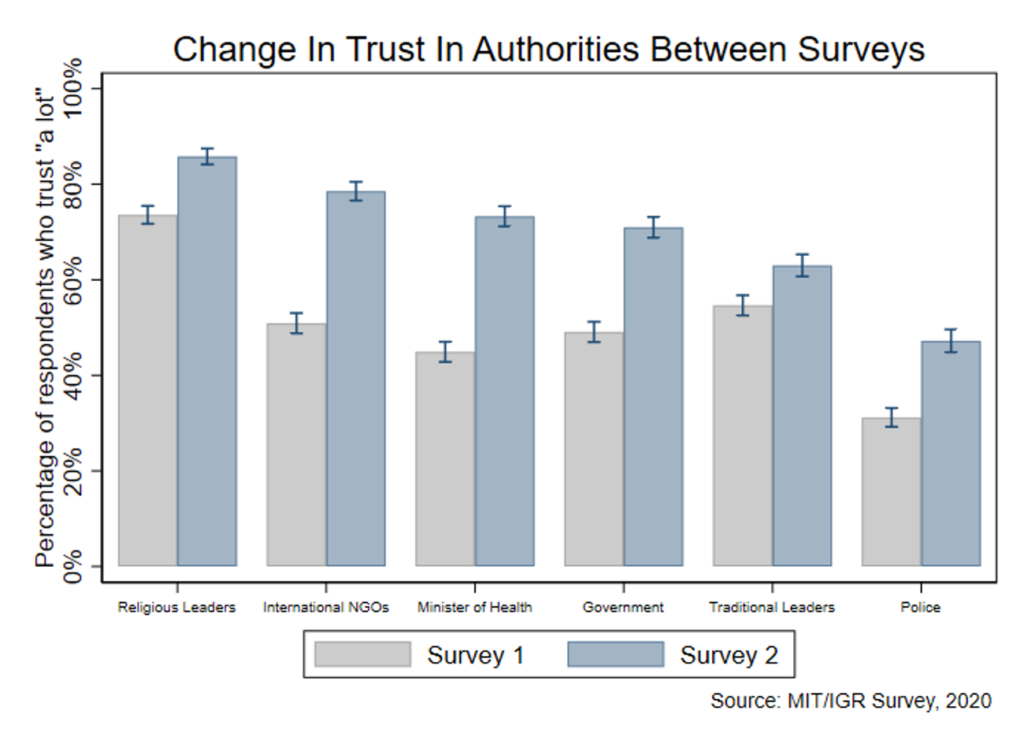 This increase in trust could be due in part to how few Covid-19 cases there were in Sierra Leone relative to other parts of the world. Washington state in the U.S. and Sierra Leone have similar populations, but around 120 deaths from Covid-19 have been confirmed in Sierra Leone, compared to over 6,100 in Washington. Sierra Leone’s government also acted quickly at the start of the pandemic to contain the spread of Covid-19, implementing a three-day lockdown and two-week inter-district travel ban in April 2020. These actions, along with the relatively low case numbers, might have made the government and Ministry of Health seem more trustworthy and reliable to citizens. 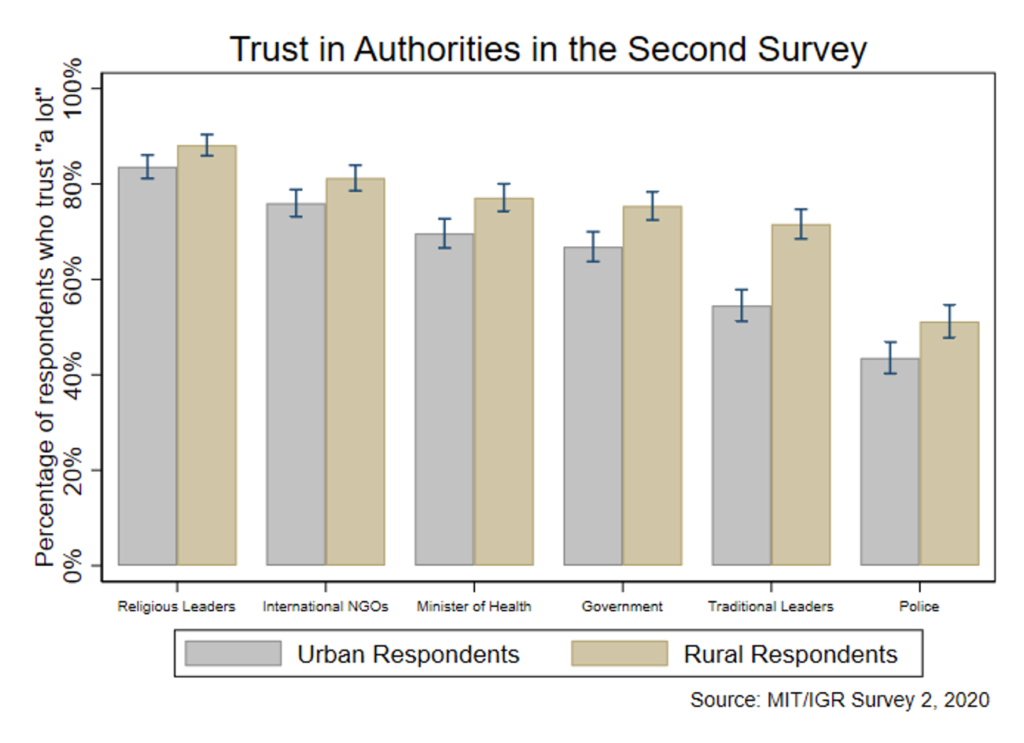 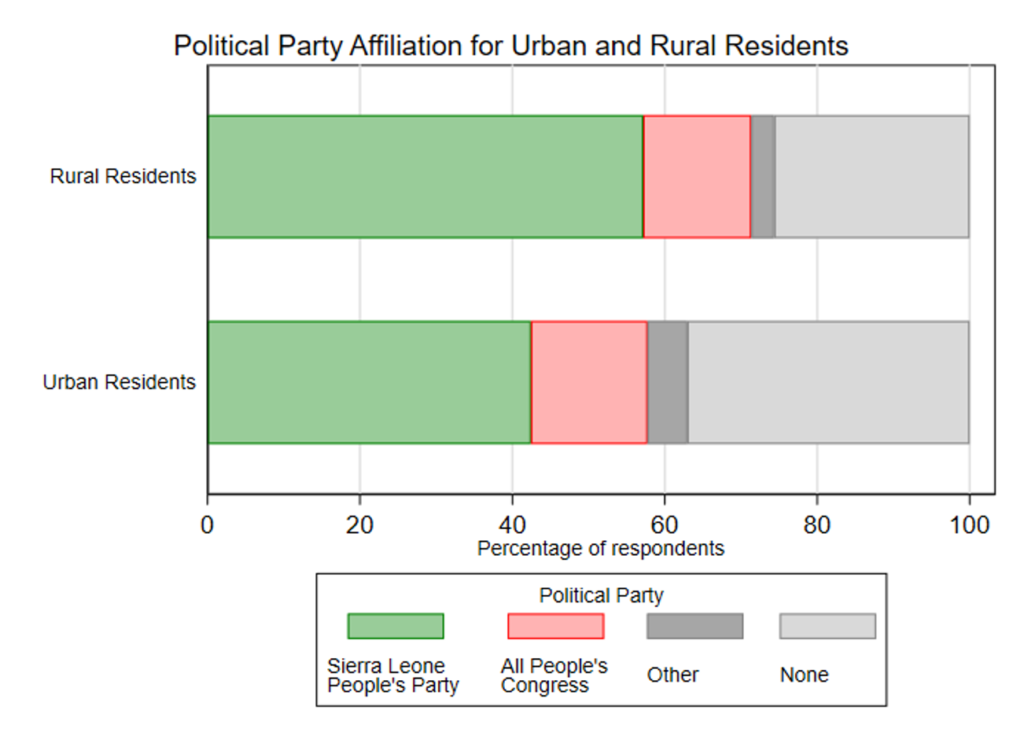 Trust in government could be an important factor in determining whether or not people are willing to get a Covid-19 vaccine. The first survey not only asked about people’s trust in authorities, but also asked if people would be willing to let their child get a measles or polio vaccination. The question was posed to all respondents, regardless of whether or not they had children. 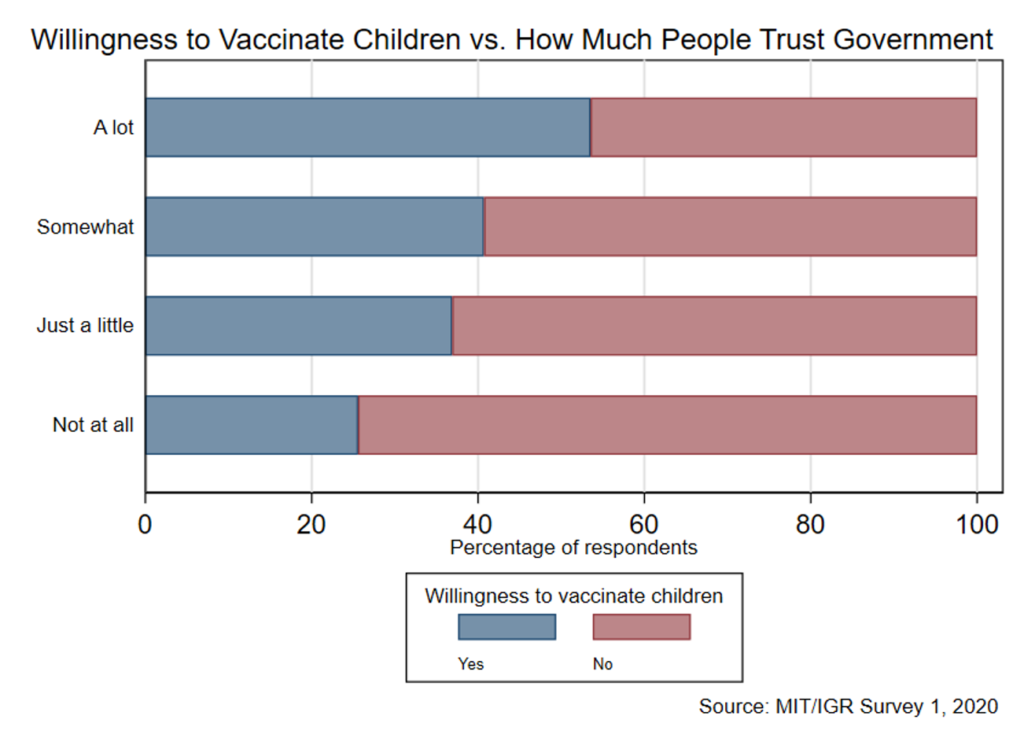 We talked to our partners at IGR, and they cautioned that people who are willing to give their children routine vaccinations might not be as willing to give their child a Covid-19 vaccine. IGR pointed out that routine vaccinations are more established in society, people might have more questions and concerns about Covid-19 and the vaccine, and misinformation about the disease and vaccines is prevalent. Furthermore, Covid-19 vaccines are currently not recommended for young children.

While the previously cited Nature Medicine article found high levels of Covid-19 vaccine willingness in Sierra Leone — in two separate surveys, 78% and 88% of respondents said they would take the vaccine if it were available — it also notes that “reports about side effects and risks associated with expedited vaccine development may have increased hesitancy.” Several countries in Africa paused their rollout of the AstraZeneca vaccine in the spring due to concerns about side effects, as did many countries in Europe.

Increased levels of trust in government and health workers between our first and second survey could be a good sign at a time when governments are working to promote vaccine acceptance. But people don’t just need to be willing to get vaccinated or vaccinate their children — they also need access to vaccines. Countries in Africa have had a limited supply of doses, and in Sierra Leone, Reuters estimates that only 1% of people are vaccinated.

Facemasks, photo by Anton on Unsplash.