Akwasi Owusu-Brempong participated in the MIT Governance Lab’s (MIT GOV/LAB) pilot mentorship program during the 2020-2021 academic year while he was a senior at Brandeis University. Akwasi was paired with MIT GOV/LAB graduate research fellow Paige Bollen.

Understanding the ethnic divide in levels of favoritism

The research project I worked on — with my graduate mentor Paige Bollen — explores the reasons why citizens have different views on government favoritism, that is, how the government may give prefered treatment, goods and services to specific ethnic groups, oftentimes aligned with political parties.  More specifically, it explores citizens’ everyday experiences and the extent to which brief, superficial interactions between people of different ethnic and economic backgrounds affect their likelihood of making claims of ethnic discrimination.

Ethnic groups, wrote Harvard professor Robert Bates in his 1974 paper “Ethnic Competition and Modernization in Contemporary Africa,” “persist largely because of their capacity to extract goods and services from the modern sector… Insofar as they provide these benefits to their members, they are able to gain their support and achieve their loyalty.” This is evident in many countries in sub-Saharan Africa, where a big challenge to governance is ethno-political rivalries. While these rivalries persist in the political histories of the countries, citizens’ perceptions of the degree to which the government engages in ethnic favoritism vary. The project uses statistical analysis to dissect these variations and provides an analysis of the findings. 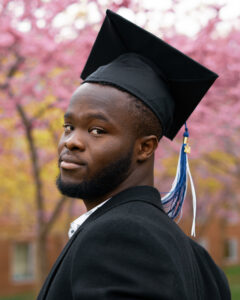 For my first task, I used data from the 2000 and 2010 population censuses to study migration patterns in Accra, Ghana’s capital, of various Ghanaian ethnic groups. I wanted to see if certain indicators like segregation and ethnic composition of the community influenced citizens’ decisions to relocate. I made and analyzed various scatter and distribution plots, and found that people who migrated within the ten-year period were more likely to move to an integrated community as opposed to a segregated one. This was true even if their ethnic group was the majority. These results were consistent across all ethnic groups except one. Additionally, I found that compared to recent migrants, those who stayed in the same community between 2000 and 2010 tended to be older and more educated.

My second task focused on analyzing perceptions of people from different ethnic groups across Africa using three rounds of Afrobarometer data — a public attitude survey on government, democratic, and economic issues in over 28 African countries. The survey includes information on levels of participation in community activities (e.g., attending a community meeting), attitudes towards other community members, attitudes toward other ethnic groups (e.g., trust in other ethnic groups), and perception of attitudes toward their own ethnic group (e.g., how often their ethnic group is treated unfairly by the government), as well as questions that asked respondents to compare their or their group’s condition to others (e.g., how are you doing economically as compared to others in the country). With Paige’s help, I identified, selected, and grouped variables into those that focused on community participation and those that focused on ethnic comparisons. I then cleaned the data and created distribution plots to understand how these behaviors and beliefs differ across countries and between urban and rural residents.

Despite it being remote, I was able to gain a lot of insights into the research process from the mentorship program. I was involved in every step of the research process, and I could see my work make a meaningful impact on the final project. The mentoring support was also beneficial; I applied lessons from this experience to my own thesis and was able to seek advice when needed. Paige was always available to provide feedback on my weekly submissions, my work ethic, and best practices for research assistants. She understood the impact of the pandemic, made accommodations when necessary, and was available to talk about issues not directly related to the research project, taking an interest in my school life and my professional life. She advised me on things I could do to improve job applications and gave me insights into what life after Brandeis might look like.

One takeaway from the year was greatly improving my programming skills in R, building on the foundations from Brandeis. I learned how challenging and rewarding it can be to answer important questions with evidence from data. Lastly, I was able to apply the skills I acquired from studying business and economics at Brandeis to a political science study on perceptions and ethnic discrimination, a field I had little knowledge about. I am extremely grateful for this experience, and look forward to applying the lessons I learned to my new job as an economic consultant at AlixPartners.

Photo of Accra, Ghana by Virgyl Sowah on Unsplash