Often when we think of education, we think about the government. Access to schooling, literacy rates, and teacher quality are all important signs of good governance. Yet in many places, the state is stepping back from providing education, allowing private individuals and corporations, non-governmental organizations, and religious organizations to directly provide education. My research seeks to better understand the politics of education and explain why India has seen such a massive explosion in privately-managed education. I define privately-managed schools as those who have management boards outside the state. This includes schools run by private individuals, missionary schools, and schools operated by the RSS, which is a Hindu activist social organization affiliated with the BJP, India’s current ruling party.

In my dissertation, I study differences in the education sector across the Indian states, investigating the relationship between elections, democratic politics and education policy. I hypothesize that more competitive state elections (i.e. more viable candidates competing for the same spot, or historically low margins-of-victory) can drive politician demand for outsourcing education to private actors. With support from MIT GOV/LAB I recently conducted fieldwork in northern India to learn more about the various actors involved in the country’s education system and figure out how to test my hypothesis. I interviewed policy-makers and practitioners in Delhi, and education bureaucrats, school providers, and elected village presidents in the neighboring state of Haryana. State governments in both Delhi and Haryana have recently invested heavily in education, improving both access and quality, following an exodus from government to private schools.

My interviews highlighted the role that politicians play in local education. I focused on understanding the roles of two types of politicians whose actions either sustain or hinder the non-state sector: Members of Legislative Assemblies (MLAs, or state-level representatives), and village-level politicians called sarpanches (elected leaders of the Gram Sabha, the lowest level of local government in India). Under India’s federalist system, MLAs and state legislative bodies implement their own education policies. These politicians spend a lot of their time in local communities, performing constituency service (Bussell 2019) and attending local events.

When I interviewed headmasters of both public and private schools, they frequently mentioned that politicians – both their MLA and the local sarpanch – would make appearances at the schools during public events as they are good avenues for building relationships with constituents. Some MLAs went even further by opening their own schools to build enduring connections with the local community. Their community ties continue after they leave office; as one interview respondent told me, “MLAs, they want to improve the system, so they open a school. After five years, they won’t be MLAs anymore, so they have to provide their own services.” These interviews highlight that politicians are able to use schools – both public and private – to gain visibility in their communities. 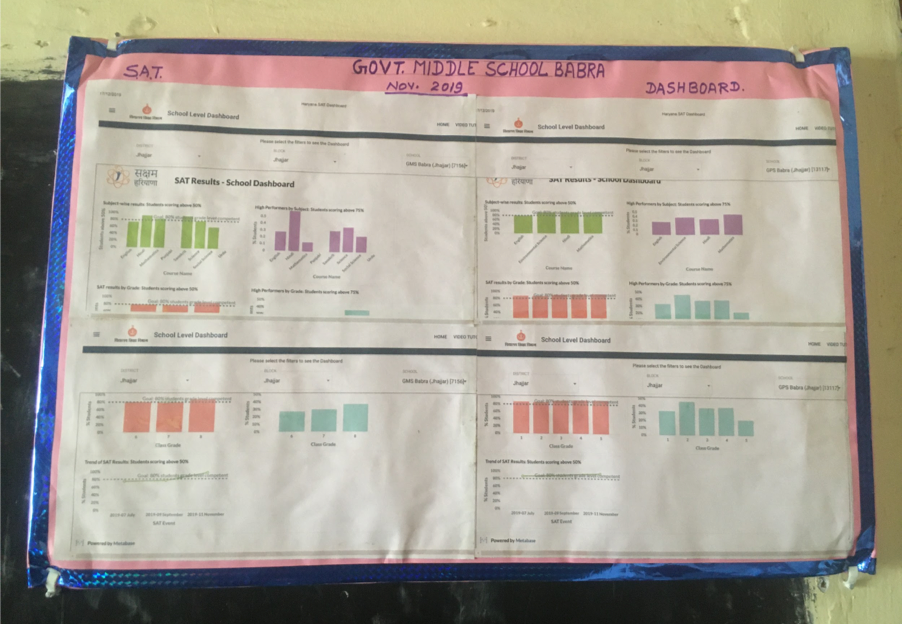 (A government school in Haryana displays the results of recent quality monitoring by the local government. Photo: Blair Read.)

I also spoke with sarpanches in villages across two districts in Haryana. Sarpanches are tasked with a variety of education-related tasks, but primarily help satisfy the demands of community members as they arise: they can help improve the school infrastructure, drop in to check on teachers, and encourage parents to send their children to school. Individual sarpanches are largely able to decide for themselves how involved they want to be in providing education. Some sarpanches are quite involved in education, taking initiative to work with schools to improve quality, while others rarely visit schools. These differences seem to be related to their attitudes towards non-state schools. Sarpanches who are less involved in education seemed to be more likely to support private schools, which give families choice. Education-oriented sarpanches in my sample thought private schools were a waste of household resources and often of poor quality.

Studying elite policy preferences through the lens of the education sector helps to understand rich variation in citizens’ quotidian experiences with the state and its non-state counterparts, and seeks to provide insights that can help practitioners improve access to and quality of services. By outsourcing authority for services to the private sector, governments are diminishing their size and scope. Citizen expectations, therefore, can become weakened as they have fewer examples of good government behavior to motivate political participation and demanding resources from the government. Witnessing this variation in state strength can be a key component of local accountability initiatives (Kruks-Wisner 2018). In the future months, I will continue designing research to test the ideas outlined in this blog post, laying the groundwork for a survey of politicians to understand their preferences for service delivery.