Relationships Between the Formal and Informal Sector: An Exploratory Survey

We asked members of organizations working on issues related to the informal sector about how they worked with informality and how Covid-19 impacted this work.

At the start of the pandemic, activist groups and non-governmental organizations made a number of policy recommendations and guidelines for mitigating the impact of Covid-19 in informal contexts — communities and activities existing and operating outside formal government regulations or legal frameworks.

Based on the review, we conducted an exploratory survey of people working for the organizations making these recommendations to see what they thought of the informal sector, how they worked with the informal sector (if at all), and how Covid-19 impacted this work.

Who responded to the survey?

What are organizations’ priorities at the moment?

We gave respondents a list of issues, and asked them to choose up to three issues that were top priorities for their organization and rank them from most important to least important. The issues listed were employment; education; water and sanitation; health and nutrition; social welfare; gender; environment; technology and internet access; and governance.

How do these organizations work with the informal sector? 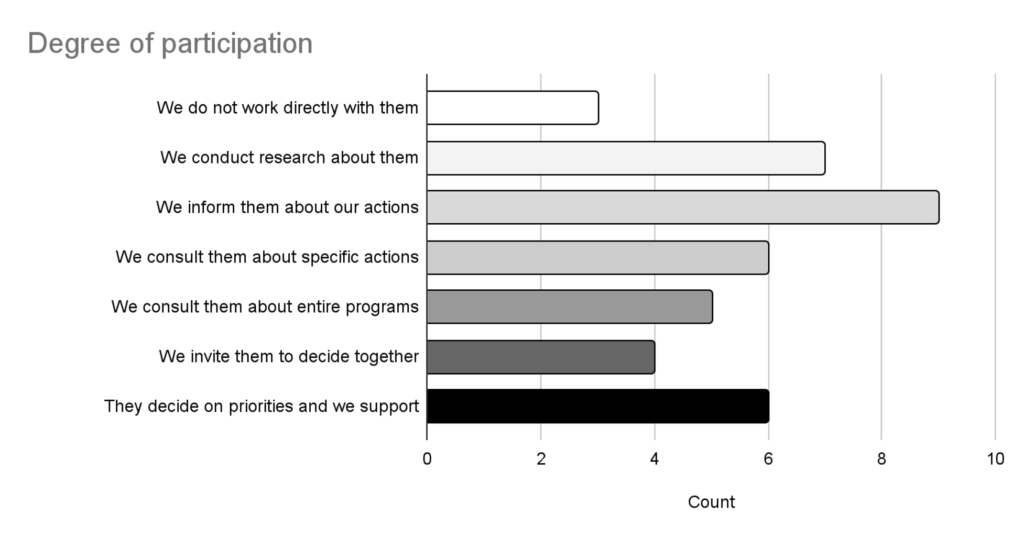 How do respondents think about informality?

We asked respondents to complete the phrase, “When I think of informality, I think about…” Respondents completed the sentence in a variety of ways. One respondent thought of informality as “informal settlements built spontaneously that lack most services and amenities.” Another simply thought of “other ways of commerce.”

Some seemed to consider people working in the informal sector as being members of their community that are denied resources and power. A respondent from the U.K. said they thought of “socially disadvantaged people struggling to get ahead.” “Black women toiling without support and only harassed by security agents,” said a respondent in South Africa. In the Philippines, a respondent thought of the informal sector as “being highly affected, but almost never consulted.”

What do respondents think of the relationship between government and the informal sector?

We gave respondents eight pairs of words and asked them to choose one of the two words to complete the sentence, “The relationship between government and the informal sector is…” Below are the pairs of words, with the size of the word indicating the frequency with which that word was selected (the larger the word, the more often it was selected). 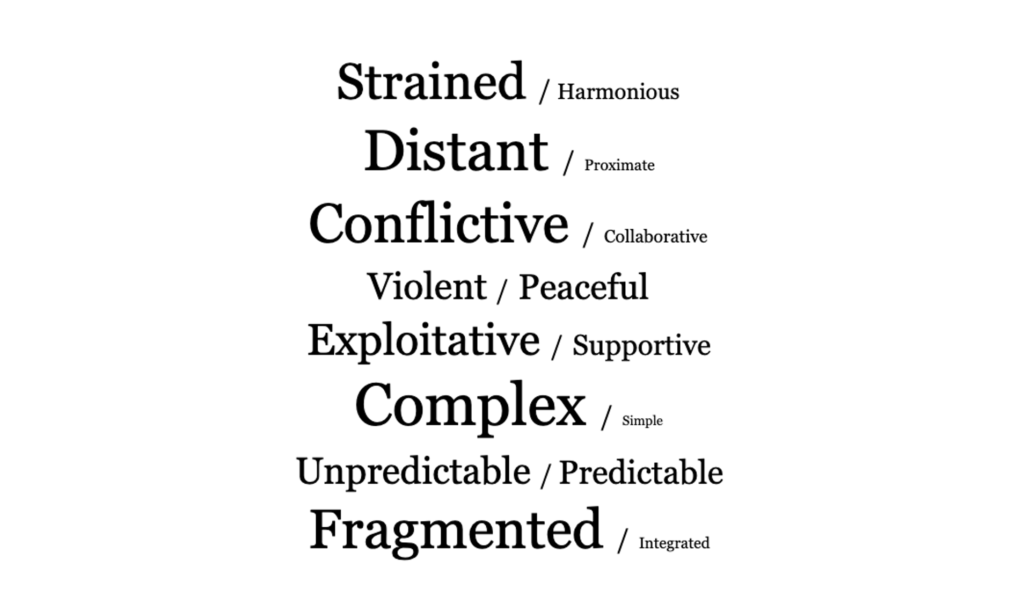 All respondents described the relationship between government and the informal sector as “complex,” as opposed to “simple,” and all but one respondent chose “fragmented” over “integrated” and “distant” over “close.” Respondents were close to equally split between “violent” and “peaceful,” as well as “predictable” and “unpredictable.”

In another question, we shared four statements describing the relationship between governments and the informal sector, and asked respondents which statement they agreed with the most. The statements are either direct quotes or paraphrased from the academic literature. The statements are as follows:

“Residents of informal settlements tend to be the poorest and most vulnerable sections of society, but within this there is variation including pockets of wealth and deeper pockets of marginalisation.” This statement was from the Social Science in Humanitarian Action Platform and was chosen by two-thirds of respondents, suggesting that the majority of respondents believe that there is diversity within the informal sector.

“The ‘informal’ sector delivers what the ‘formal’ sector has difficulty tackling, such as low-cost housing in central locations or socio-economic networks of solidarity.” About a fifth of respondents chose this statement highlighting how the formal and informal sectors complement each other from the MITx course “Covid-19 in Slums and Informal Settlements.

“There is informality in the formal and vice versa, the two are integrated.” This statement from a 2020 paper published in the journal Cities was chosen by three of the 21 respondents.

None of the respondents chose the following quote from this 2016 paper published in the Singapore Journal of Tropical Geography: “The formal and the informal are opposites. Formality is the site of norms, rules and regulations, while informality is the exception, and the realm of the unruly.” This suggests that respondents don’t view the formal and informal sectors as being in opposition to each other.

How has Covid-19 changed the way respondents’ organizations are addressing their work with informality?

We asked respondents how Covid-19 has affected their work on the issue they selected as their top priority. 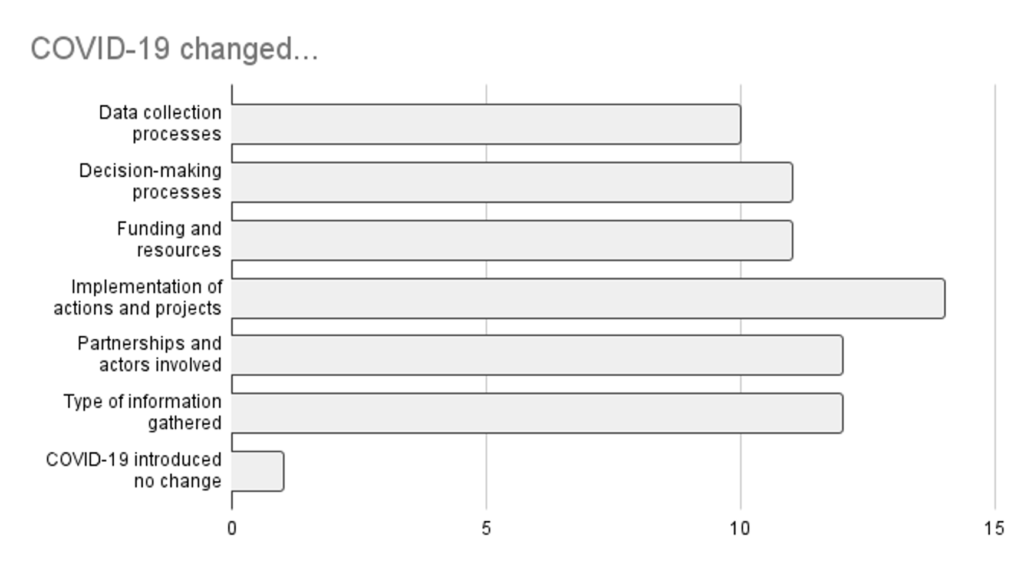 As shown in the graph above, all but one of the respondents thought the pandemic changed the way they addressed their top priority. Many thought their work was affected in several ways — 17 of the 21 respondents selected two or more changes.

What challenges did this change introduce?

Most respondents thought that this change made their work more challenging in some way, most commonly with implementing actions and projects.

In summary, we found that respondents agreed that people living in informal settings lack agency in decision making, but only some of the respondents’ organizations effectively empowered those people as equal members of a decision-making process. Overall, Covid-19 changed the way these organizations approached important issues, including changing  the actors involved and the types of partnerships for problem-solving, and it also introduced new challenges to their work.

Over 70% of respondents agreed that these changes and challenges created opportunities for new or different relationships between governments and the informal sector, at least to some extent. In our next post, we will share some case studies that will go into more detail about these opportunities, and how different places took advantage of these opportunities with varying levels of success.