As the culmination of a two-week workshop on governance innovation, Sierra Leonean civil servants presented project proposals to audience members and a panel of judges at a June 18 pitch night at the Radisson Blu Hotel in Freetown, Sierra Leone.

Designed by the MIT Governance Lab (MIT GOV/LAB) and Sierra Leone’s Directorate of Science, Technology and Innovation (DSTI), the boot camp taught strategies for identifying and understanding governance problems and finding creative, evidence-based solutions. The civil servants participated in interactive workshops, listened to lectures from guest speakers, and developed a prototype for a solution to a problem they’d like to explore more deeply with colleagues in their department.

This project is part of a governance innovation initiative at MIT GOV/LAB developed with the goal of combining tools from social science and human-centered design to find ways to make governments more accountable to citizens.

“Governance innovation is at the core of service delivery and citizen engagement,” said David Moinina Sengeh SM ’12, PhD ’16, Sierra Leone’s minister of basic and senior secondary education and chief innovation officer, as well as the head of DSTI, in an address at the pitch night. “If you think about the importance of government, our objective is to provide services for our citizens, wherever they are.”

Professor Lily L. Tsai, MIT GOV/LAB’s director and founder, said via video remarks at the event that “we designed this boot camp with the purpose of … introducing a framework for governance innovation that brings together government officials who want to create solutions to the problems they encounter every day.”

At the pitch night, judges evaluated proposals of teams from six different government departments and awarded a total of $80,000 in funding across three teams. The teams are expected to use the funding to develop a preliminary version of their product, which they can later refine and get feedback on from users.

A winning team from the National Revenue Authority pitched a portal for taxpayers that would include information on deadlines and instructions on how to pay taxes, as well as tax calculators and live chat support. They hope the portal would not only increase revenue for government programs, but also make the department more responsive to citizens who need support for meeting their tax obligations. The system would save people time and money, since many have to travel to and pay a tax agent, and reduce human error with collecting taxes.

Another winning team, from the Office of the Administrator and Registrar General, proposed digitizing the country’s land registry records, which are currently paper-based. Since it takes a long time to sift through paper records, land transactions are frequently delayed. Many paper records are in poor condition due to heat and humidity, and many have been misfiled, resulting in a large number of land disputes. A complete digital record would allow the office to better protect people’s property rights, allow citizens easy access to their land registry records, and reduce the time needed for transactions.

The third winning team, from the National Public Procurement Authority (NPPA), introduced a plan for improving public procurement reporting. Their department regulates and advises on the government’s public procurement process, but they are two years behind on their reports, in part because of their paper-based process for collecting data. NPPA proposed a centralized database that would allow them to publish more up-to-date reports and conduct more robust data analysis, enabling them to provide other departments with more evidence-based findings for better policy interventions. Since their reports would be both more timely and credible, this could both increase procurement officers’ compliance with NPPA regulations and result in better services for citizens.

Other proposals included a standardized performance indicator for public school teachers and a digitized monitoring and evaluation process for the procurement of government vehicles.

DSTI also committed six months of technical support to the winning teams, including feedback on teams’ progress, technical advice on product design and development, physical space to meet, and connections and introductions to other funding sources. But the idea is that all of the participants will be able to use the skills developed in the boot camp to foster a culture of innovation within their departments. “Our hope is that you will go over to your ministries, departments, and agencies, and you will be different, that you will have learned a lot,” Sengeh said at the pitch night.

The pitch night’s audience included other civil servants, as well as the chairs of a number of departments. Among the judges were Mohamed Lamin Tarrawalley, Sierra Leone’s solicitor general; Professor Fredline M’Cormack-Hale of Seton Hall University, who is also the research and policy director for the Institute for Governance Reform in Sierra Leone; Mariama Anthony Williams, the country head of the Tony Blair Institute in Sierra Leone; Iman Beoku-Betts, a data scientist at the Ministry of Basic and Senior Secondary Education; and Asmaa James, a journalist, women’s rights activist, and host of the human rights radio program “Good Morning Sierra Leone.” 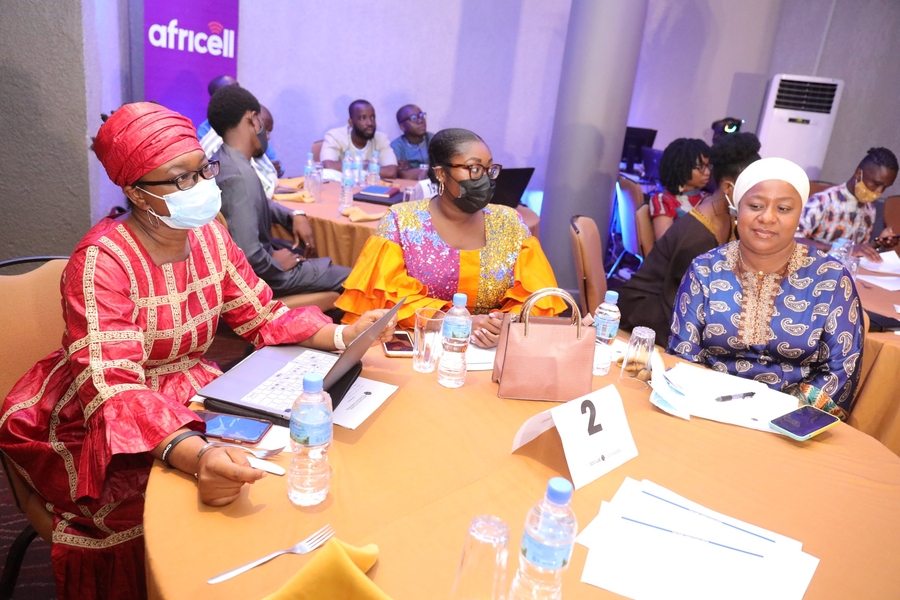 Presentations were evaluated on the teams’ understanding of the problem, its relevance, and its context; whether their proposed solution is evidence-based, human-centered, and original; the idea’s potential for solving the problem, changing normative behaviors, and improving the lives of citizens; the feasibility of the outcomes and any potential risks; and the quality of the presentation.

The boot camp’s content was developed by an MIT GOV/LAB team led by Susy Tort SM ’19 and including Gabriela Reygadas and Innocent Ndubuisi-Obi Jr. Kate Krontiris MBA ’12, a civic researcher and strategist, facilitated the boot camp in Sierra Leone.